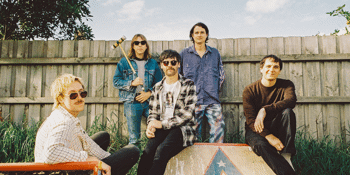 On their fifth album Bittersweet Demons, The Murlocs share a collection of songs reflecting on the people who leave a profound imprint on our lives, the saviors and hellraisers and assorted other mystifying characters. The most personal and boldly confident work yet from the Melbourne-based five-piece—lead singer/guitarist/harmonica player Ambrose Kenny-Smith, guitarist Callum Shortal, drummer Matt Blach, bassist Cook Craig, keyboardist Tim Karmouche—the album sets that storytelling to 11 infectious tracks written mostly on piano, lending a greater emotional intensity to the band’s restless and radiant brand of garage-rock. What emerges is a beautifully complex body of work, one that shines a light on the fragilities of human nature while inducing the glorious head rush that accompanies any Murlocs outing.

This event is strictly 18+
This event will comply with all Covid-19 restrictions in Tasmania. Due to the changing nature of restrictions at the moment further details will be released at a later date. Be prepared to abide any precautions necessary.
----
Please be aware of fake events on social media, and be advised that this performance is not streamed. The official ticketing agency for this show is Oztix. Tickets purchased through third parties such as ViaGogo, Gumtree, Facebook are done at your own risk. Fraudulent tickets will not be honoured